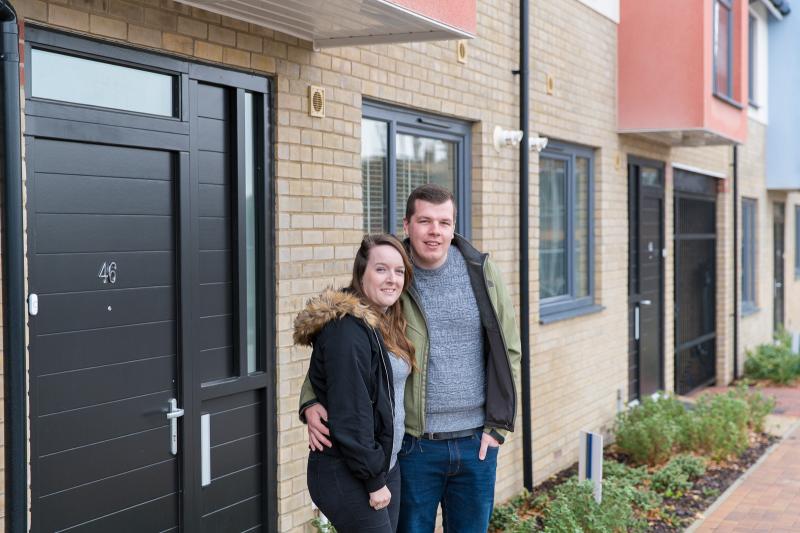 First time buyers Edward Calderbank and Lauren Moss have recently moved into their beautiful two-bedroom house, ‘The Amber’, at Crest Nicholson’s Rosewood development in Colchester. The couple had previously been living with their parents but had been eager to move out and buy their own property for a while, in order to start their lives together properly.

The Rosewood development was top of their wish-list of places to live thanks to its fantastic location near the station and its easy reach of the A12 at junction 28 and Colchester town centre. It also appealed to the couple as Edward’s mum already lives on the development and was in fact one of the first purchasers to secure a home on the site!

‘The Amber’ gives Edward and Lauren the element of space they are both looking for, in addition to the bonus of outdoor space with the roof terrace and garage. The property really stood out to them as first time buyers because they had found other two bedroom properties in their search had often felt quite cramped and didn’t allow room to grow into.

When the Help to Buy ISAs were launched in December 2015, Edward and Lauren jumped on the opportunity to have a helping hand towards their first home. After securing the property in April, the couple cashed in their ISAs and benefitted from a £900 bonus between them, which proved helpful when they purchased the house for £235,000.

Edward and Lauren are originally from Colchester and are thrilled to be able to purchase a stunning new house in their home town without having to look further afield. Rosewood is well-situated for both of their jobs, with the transport links and easy access to the A12 vital for Edward’s London commute. Edward said: “Rosewood really is the perfect location for us as I can hop in the car and be on the road on my way to work in no time, which is ideal.”

Situated to the north of Colchester, the development is ideal for city commuters looking to gain some extra space. Trains to London Liverpool Street take just 48 minutes, and a fantastic selection of schools are located in the surrounding area.

On top of this, Rosewood is already a well-established flourishing community. Edward continued to say: “Rosewood was always at the front of our minds during our property search ever since my Mum bought her home there and we already have some happy memories of the development as a family.”

Rosewood is also close to the picturesque open countryside and the idyllic villages of Dedham and Flatford, as well as being within easy reach of Colchester town centre and the new Northern Gateway leisure development.

Lauren added: “It’s so green around here, the development offers the feeling of being near the countryside but also being safe in the knowledge that you’re really well connected. We also love the fact that there’s lots to do nearby; there’s a great selection of restaurants and bars.”