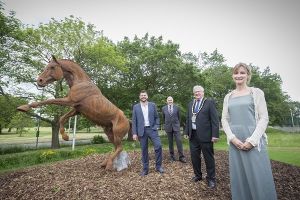 The Mayor of Wokingham Borough, local dignitaries, and special guests from the community, joined housebuilder Crest Nicholson for the unveiling of three striking horse statues at its Arborfield Green development in Wokingham, on Friday 11th June.

The life-size iron-resin statues, titled Icarus, Sports Horse Mare and Youngster were commissioned by Crest Nicholson to commemorate the rich history of the site, which was previously a Remount Depot and Horse Infirmary, supplying the military with horses for operational use from 1904. The three sculptures were designed and created by Amy Goodman, renowned sculptor, and portrait artist.

Over 100,000 horses are said to have passed through the Depot, once known as Arborfield Garrison, which remained open throughout the Second World War. After the eventual closure of the Depot, the Garrison became home to a number of army technical schools where approximately 50,000 trainees completed their apprenticeships.

Special guests on the day included the Mayor of Wokingham Borough, Cllr Keith Baker MBE, members of The Corps of Royal Electrical and Mechanical Engineers, as well as the Arborfield Old Boys Association, a local charity representing those who had passed through the Arborfield Army Apprenticeship establishment.

Amy Goodman, sculptor and portrait artist, says: “After all these months of hard work I am incredibly proud to finally see my finished artwork on site. I wanted it to be as historically accurate as possible and was able to base one of my sculptures on a Cleveland Bay stallion at Cholderton Farm, which was just five minutes from my studio. I created the rearing light draught ‘Icarus’ war horse sculpture, with a hogged mane and short tail. The branding on his quarters and hooves inscribed with the date 1918 serve as a reminder of his history.

“I had a very intense five and a half months doing the clay work on my own, however this was a dream commission for me, and I relish working at this scale! I wanted to capture ‘life’ in the horses, so I modelled the clay intuitively using fast movements and texture, and we finished the sculptures using iron-rust patina which is exceptionally vibrant and should complement the green of the beautiful surrounding landscape.”

Mayor of Wokingham Borough, Cllr Keith Baker, comments: “Until the amazing hit play ‘War Horse’ and the subsequent movie very few people fully understood the essential part horses had in the countries World War 1 efforts. So it is not surprising that a huge increase in interest in these stables has occurred in recent years. Over a million horses were requisitioned or purchased for the war effort and only 10% returned. Many of those horse who actually made it back were treated at this very place. The stables here are protected for the nation and I would like to thank Crest Nicholson for their investment, ensuring they are maintained, guaranteeing their preservation for the nation. These three magnificent statues of horses, commissioned in early 2018 some 100 years after the end of World War 1, are a testament to the commitment by this developer to highlight this unique local facility in our history.”

David Hnyda, Director of Sales and Marketing at Crest Nicholson Chiltern, adds: “We are pleased to welcome the Mayor, the Arborfield Old Boys Association and local stakeholders to Arborfield Green to celebrate the unveiling of these three striking sculptures. Arborfield Green has been developed in line with Crest Nicholson’s Garden Village concept, which aims to create community-minded homes surrounded by green open space. This public art is located next to a new bridleway being created and for years to come will act as a reminder to the community of the rich military history of the site.”

The sculptures will complement the range of high-quality homes available at Arborfield Green. Comprising over 2,000 new homes and designed to suit a multitude of lifestyles, the residents at this unique Garden Village benefit from access to a range of amenities and facilities on their doorstep – including Bohunt Secondary School, two nurseries, play areas, allotments, community gardens, new footpaths, a lake, a brand-new leisure centre and Hazebrouck Meadow, which incorporates 35 acres of parkland.

Crest Nicholson has also launched its new sales suite which is located at the heart of Arborfield Green. To book an appointment to learn all about the development and the homes on offer call 0184024768 or visit www.crestnicholson.com/arborfieldgreen.