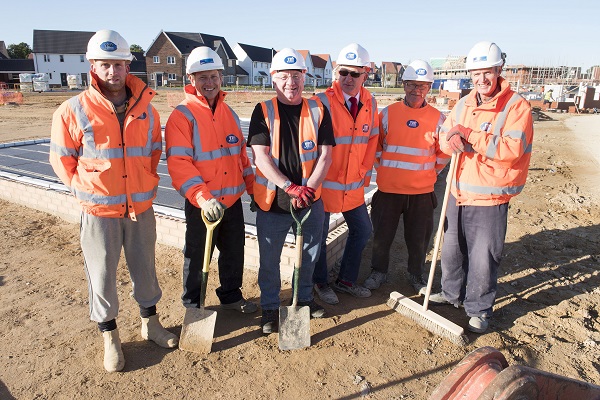 Donating a substaintial £7,000 for Peter’s assistance, the East-Anglia based civil engineering firm employed Peter for the day, and tasked him to assist with onsite tasks. Crest Nicholson and the local engineering firm have worked together on a number of projects in the past.

The money raised from the charity auction last Christmas has been donated to the developer’s chosen corporate charity, Variety, that supports disadvantaged children and their families across the country. The donation forms part of Crest Nicholson’s long-standing relationship with Variety, as over the last ten years Crest Nicholson has donated almost £800,000 to the charity. Crest Nicholson’s Eastern division alone raised £52,252.25 at their annual Ball and a charity golf day earlier this year.

Peter Diffley, Managing Director at Crest Nicholson Eastern, said: “I would like to thank the team at SEH Ipswich for their incredibly generous donation, and for allowing me to help out today! The money raised from this donation will go towards vital equipment and support for those that need it most.

“Variety does such a fantastic job for disadvantaged children across the UK, and we’re proud to offer our continued support for them.”

Crest Nicholson has homes available at Aster Meadows, with prices starting from £350,000 for a four-bedroom house, or just £280,000 on the Help to Buy scheme. To find out more, call 01638 501085 or visit www.crestnicholson.com/astermeadowsatkingswarren