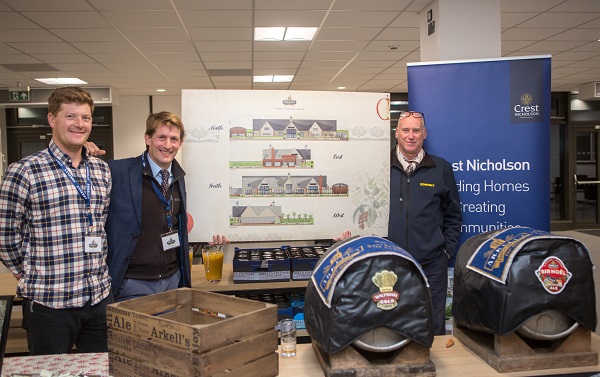 Crest Nicholson and Arkell’s Brewery have announced plans for an exciting new pub set to launch at Tadpole Garden Village next year.

Hosted at Great Western Academy on Tuesday 27 November, the event showcased a selection of Arkell’s Brewery’s finest beers, as owner George Arkell announced plans for the pub to over 150 residents and Swindon locals. The pub, set to be located near the western common, will include a mix of dining options, an outside terrace, a pizza oven and a games room.

Crest Nicholson has been working with local Arkell’s Brewery, Preim and Architects Clark & Maslin on the project. While it’s still subject to planning approvals, Crest Nicholson and Arkell’s are planning to begin work over Spring 2019 with the aim to open the pub at the end of 2019.

George Arkell, Managing Director at Arkell’s Brewery, said: “We’re really excited about this project, which will be the first new-build for Arkell’s in some 15 years. The location is fantastic, and we look forward to delivering a welcomed addition to Crest Nicholson’s Tadpole Garden Village and the surrounding area.”

Andrew Dobson, Managing Director of Crest Nicholson Strategic Projects said: “We are pleased to be making moves to deliver a pub for our many residents at Tadpole Garden Village. The preview event provided an excellent opportunity to showcase the much-anticipated new plans for the locals. The pub will be one of the many amenities on offer at the development, among shops, a primary school and other community facilities.”

The collection of traditional and contemporary homes available at Tadpole Garden Village include one- and two-bedroom apartments and two to four bedroom houses. Homes are priced from £195,000 to £460,000 across its phases Evolve, The Copse, Stray Park, The Village and The Farmstead. For more information visit www.crestnicholson.com/developments/tadpole-garden-village