Third National Award Win of the Year for Park Central 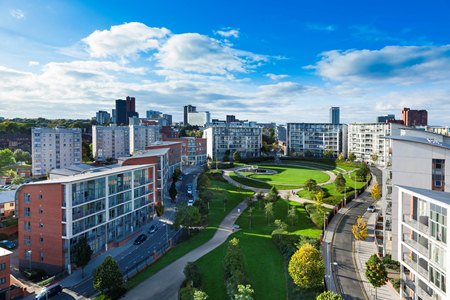 Park Central proudly received the prize for the ‘Best Starter Home Scheme’ at the ceremony which took place on 21 November at London’s Grosvenor House Hotel.

The property industry’s leading new homes awards, the What House? winners are selected by an expert panel of property and industry specialists.

Earlier this year the 61 acre regeneration project was also named the Best Regeneration Project at the Housebuilder Awards, followed by Development of the Year (over 100 homes), earlier in the summer, at the Sunday Times British Homes Awards.

Debbie Aplin, Managing Director for Crest Nicholson Regeneration, said: “It’s fantastic to have received yet another winning national title for Park Central and it clearly demonstrates the development’s continuous popularity and attraction to the first-time buyer market.

“The development is one of the largest regeneration projects in Birmingham and over the years has proved popular with young professionals that work in the city centre and with parents buying the first home for their children who are currently studying at one of the five universities in Birmingham too.

“The practical and spacious layouts, exceptional high quality finish and ease of location from the many canal-side bars at Brindleyplace, the business district and transport hubs also makes it attractive for young people to easily get around Birmingham from Park Central.

“Additionally, with financial incentives like the government’s Help to Buy and NewBuy schemes available at Park Central, getting onto the property ladder for first-time buyers is easier too.

“Winning the What House? Award is a fantastic merit to the Park Central community and the successful partnership between Crest Nicholson, Optima Community Association and Birmingham City Council. We’re proud to have achieved such recognition.”

Park Central is a 61-acre residential-led mixed use scheme located off Lee Bank Middleway, which was once epitomised Birmingham’s image as a ‘concrete jungle’. Improving the future of this area, Crest Nicholson is on course to deliver 1,600 new homes including apartments and houses, together with 285,000 sq ft of commercial space. At the heart of Park Central are eight aces of landscaped public parkland.

Following strong sales all year, a brand new phase of homes has been released at Park Central. Named Madison Walk, the phase is made up of three bedroom freehold houses and one and two bedroom apartments, all of which have been designed with modern fixtures and fittings, as well as contemporary kitchens and bathrooms. Prices for the new apartments start from just £122,500.

For more information visit www.parkcentral.co.uk or pop into the marketing suite, located at 61 Mason Way, Birmingham B15 2GE, which is open daily between 10am and 5pm. To make an appointment, call 0121 666 4666.